Sigma Chi Penn Hijinks: read your brothers’ stories and share your own 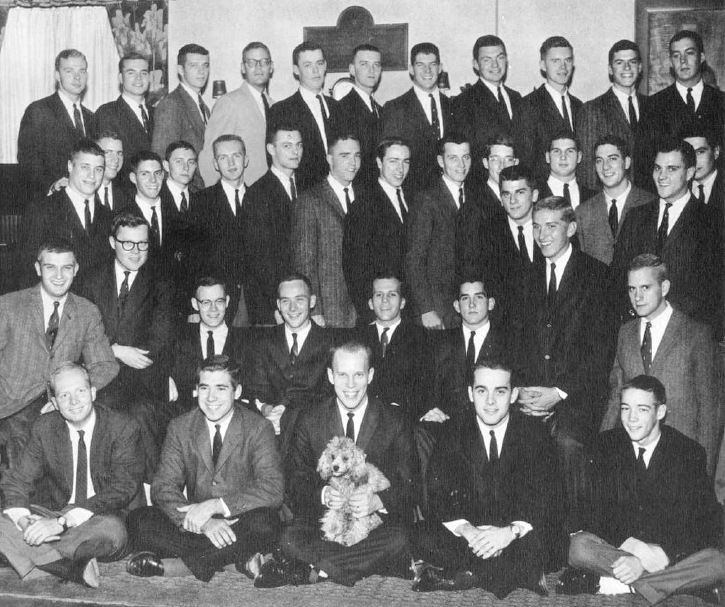 What were the best nicknames you called your brothers and how did they come about?

When’s the last time you saw a Phi Phi Chapter brother in person? Who were you with, where were you, and what was the occasion? Do you have a photo from that day?

What was Sigma Chi known for during your time at Penn?

Read on to find out how other Phi Phi Chapter of Sigma Chi alumni answered these questions.

Others good nicknames were Spike for Alvin Shoemaker ‘60, The Fox for Ron Smith ‘59, Howie for Howard C.  McLaren ‘61 (not unusual), Sack for Silas Schultz, Dutch for Kenneth Shutler ‘60, Careful For Clifford Currier ‘61 (rare) assigned by John Gonas ‘61, Chet for David Hauck ‘59 assigned by Hunts… Sorry, but I could not tell you the origin or background of all those above.

Last time you saw a classmate: Attended a luncheon at the Penn Club in NYC, June of 2019. Saw Jon Greenawalt ‘61, Bob Gleason ‘61, Murray McComas ‘58, a few others I have forgotten plus several undergrads whom I did not know. It was to commentate Jon Huntsman ‘59, who would have been 80 on 6/20/19. Jon was my big brother during pledging and a close, dear friend as well as a mentor until he died.

Top social event: Did not graduate from Penn. Moved to the West Coast and graduated from USC. Huntsman was there at the same time for an MBA.

What Sigma Chi was known for: High-quality members many of whom were involved in extracurricular activities.

Nicknames: Psycho-Weiny, because the song he was most associated with was Psycho-Killer by the Talking Heads.

Last time you saw a classmate: I can not recall.

Top social event: Spring formal because I attended with the sister of another brother who was also a good friend.

Want to share your own stories? Click here to submit your answers to the questions above. We’ll publish your response in a future alumni e-letter! If you have a picture to share, email it to alumninews@affinityconnection.com with the subject line “Sigma Chi Penn Photos.”